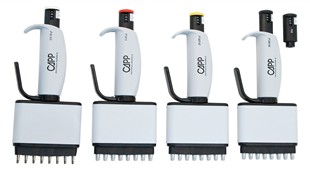 By the year 1974, the Pipette has seen major improvements evolving as new problems arose. By the year 1984, although the design and basic principals of the Pipette remained relatively in-tact, there were still concerns raised by Lab researchers relating to cross-contamination and bacteria. In our opinion, 1984 was the year that definitively set the precedence for the ‘Pipette of the future’.

Lab researchers, although happy with the functionality of the pipette, were still concerned about cross-contamination between samples and bacteria being passed via the pipette.

About 80 percent of the pipettes on the market today are now autoclavable. Other pipette innovations from Capp included the volume control knob, a patented feature that allows the user to turn each pipette from left handed to right handed and adjustable to fixed volume in a matter of seconds. The continuously adjustable, smooth micrometer is in the volume control knob, typically known as the “thumb knob” in other lines, rather than in the body of the pipette. This allows the user to custom design pipettes for his or her specific use at minimal cost.